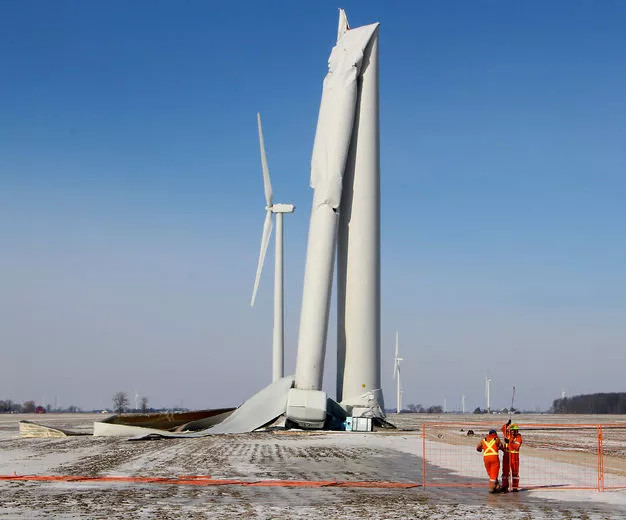 The investigation continues into what caused a turbine tower to topple in south Chatham-Kent.

“Our team of experts is onsite and currently investigating the cause of the issue,” stated an email from Chad Reed, director of investor relations for TerraForm Power, which owns the Raleigh Wind Power facility where the turbine tower buckled in the early morning hours of Jan. 19.

It doesn’t appear any part of the collapsed turbine has been moved since the incident. One noticeable change has been rust that’s showing on sections of the tower.

However, Reed said, “we continue to make progress on the inspection.”

Noting that the entire 52-turbine facility remains offline as a precaution until the inspection is complete, he wrote: “We currently expect a portion of the Raleigh facility to return to regular operations in the coming two weeks.”

There were no injuries caused by the turbine tower buckling and Chatham-Kent police have previously said no foul play is suspected.

A ministry official added: “We are actively monitoring the situation and will ensure that the company determines the cause of the incident.”

The ministry has also requested a report from the company about the cause of the collapse when their assessment is complete.

The incident prompted renewed calls by two area Progressive Conservative MPPs – Rick Nicholls and Monte McNaughton – for the Ontario government to impose a moratorium on further construction of other wind turbine projects in the region.

View the original article at ChathamDailyNews.ca

Meet Rudy, the high-wire robot that could be N.L.’s next big invention

ISO 45001: A New Standard in Global Occupational Health and Safety