Being professionally involved in the RF industry most of my working career (and as a ham since my teens), I have to admit that my visual horizon when driving or walking is finely tuned to structures that have antenna’s on them. Often, these structures also support interesting wildlife that creates a home out of the structure. Eagles, Osprey and Storks are well known to many riggers when called upon to service a tower or make antenna adjustments. One particular fauna seems to be quite common across the entire continent: The tower top obstruction beacon in a nest of antennas and masts.

The obstructed-obstruction light scientific Latin name is Obstaculo Impediretur Lucem and isn’t partial to any particular tower company or geographic area. However, upon countless hours of tower watching, a trend does start to take shape where Obstaculo Impediretur Lucem can come to roost. This can happen when the structure is designed, and built in a silo approach, where the civil, structural, field operations and owner allow minor details to be lost in the noise and handoff between entities. Ultimately, the tower must be managed as a system that must exist in harmony with it’s environment for many years after it is planted.

The civil engineer provides a good foundation for structure and considers the underlying geotechnical reality. The amount of elevation above ground that the foundation provides is not usually added to the tower elevation. The structural engineer considers his steel skeleton and whatever loads will land on it, but elevation labels exists only within the bookends of the structure. The customer provides the tower engineering firm with a loading list of antennas that will exist on the tower or protrude above it. The tower drawings are provided to the customer with their antennas (or pinwheel mounts), as well as the lightning air terminal clearly showing. A short tower top beacon mount is provided that minimally clears the tower skeleton, but not the surrounding pinwheel. Alas, these pinwheel masts and numerous panel antennas it supports is the nesting material where Obstaculo Impediretur Lucem likes to live.

The field installation teams or riggers do provide “as-built” feedback to their respective engineering departments, but usually don’t have to mark up the obstruction beacon, as the tower engineer has already drawn its perch within, not above the pinwheel. I’ve concluded that some believe it to be futile to measure and show elevations above the tower structure, as the elevation ruler stops with the structure. Elevations above the structure remain undocumented (as does the elevation provided by the foundation). With the rapid pace of construction, these minor details often escape the tower owner, so the unwelcome perch of Obstaculo Impediretur Lucem is allowed to be reproduced in many locations.

The beacon mounting plate is often welded to a mast and attached to the tower by U-bolts, but ironically, the mast that is provided is just long enough for mounting, not to be raised high enough to clear the surrounding flat panel antennas! This prevents riggers from dealing with on-site variables to ensure the beacon mount is high enough to avoid a squatting Obstaculo Impediretur Lucem.

Once the tower owner realizes that the underlying process that is producing this Hinterland specimen is outside of their control, they can instruct their RF Engineering teams to keep all flat panel antennas below the top of the tower structure. This does resolve the tower beacon obstruction issue, but seems to forget the main purpose of the structure is to support antennas at the pleasure and intensions of the RF Engineer.

From a regulatory perspective, Transport Canada maintains a registry of tower heights which it considers to be the elevation at which the highest protrusion above the natural ground that can have contact with an aircraft. This “real” height also governs the type of obstruction lighting system to be applied… E1, E2, etc. TC Standard 621 and common sense requires that the obstruction lighting have a clear view of the horizon so that a pilot on a collision course can be warned away. Something that can’t happen if lights are blocked from the horizon.

At night, a beacon firing into the back of panel antennas will make itself very obvious to neighbours. Neighbours like to see stars, not tower structure. Errant pilots would want to see the beacon, not have some azimuths blocked by panel antennas.

In my opinion, if all antennas and tower attachments were listed in an all-inclusive ground-to-lightning-rod tip Tower Attachment Table, including all guy wire, torsion bars, antenna, and tower lighting fixture attachments with their exact elevation relative to ground, the matter would correct itself and a few other associated elevation accuracy issues. But then poor Obstaculo Impediretur Lucem would have no where to roost. 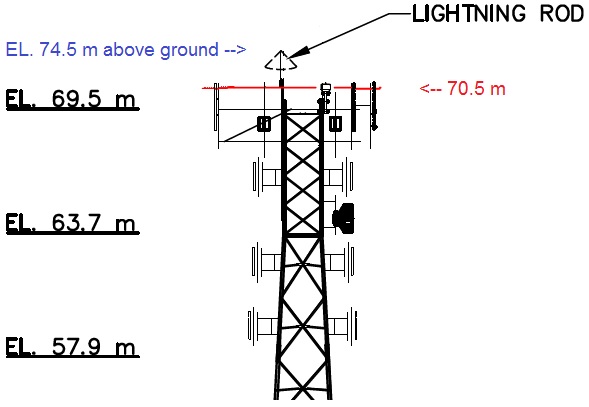