The following article is being posted here as a reminder of the need to always use proper fall protection – including the 100% tie-off principle – and to remind employers and supervisors of the liability they assume with regards to providing a safe workplace environment.

This article originally appeared on cbc.ca on November 14, 2016. 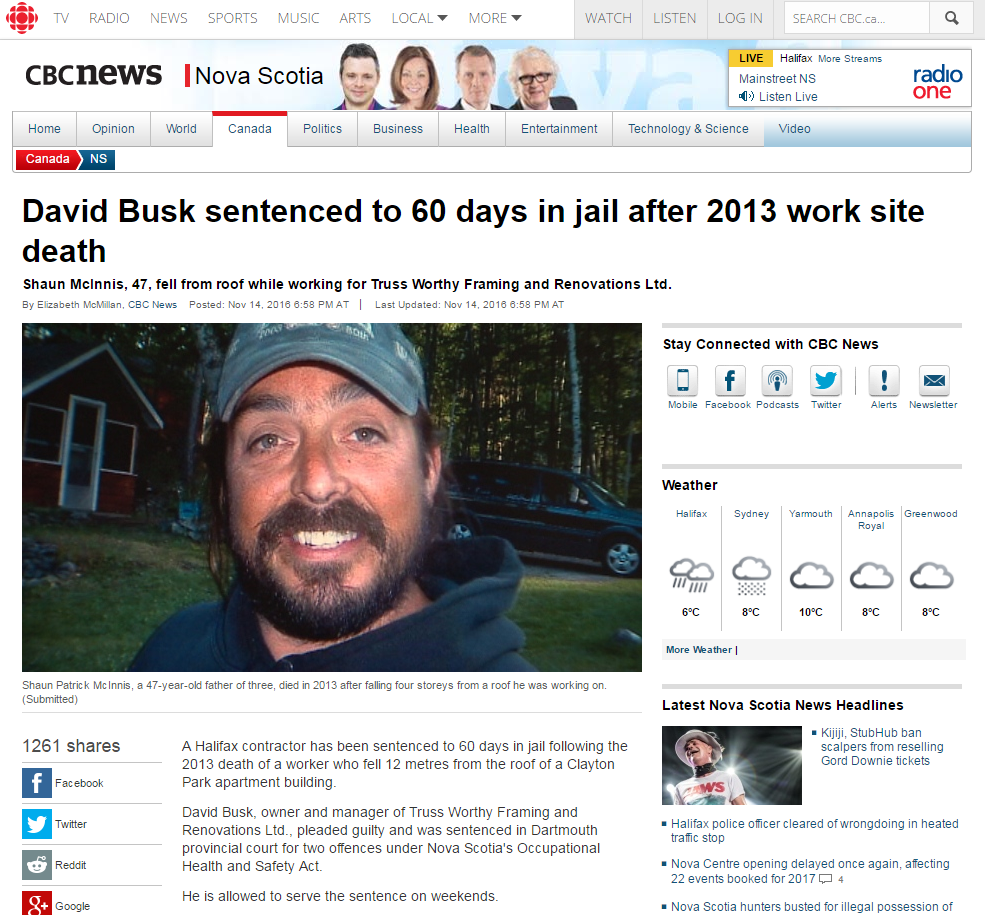 A Halifax contractor has been sentenced to 60 days in jail following the 2013 death of a worker who fell 12 metres from the roof of a Clayton Park apartment building.

He is allowed to serve the sentence on weekends.

Shaun Patrick McInnis, a 47-year-old father of three, was working as a foreman installing roofing at the four-storey Lacewood Drive building when he fell. The court heard he was wearing a safety harness but it wasn’t secured to the roof. McInnis was pronounced dead in hospital.

In his Oct. 28 decision, Judge Patrick Curran said workers die far too often as the result of falls.

“The people who operate the businesses on work sites not only have to be aware of the potential risk of life from falls but surely are aware,” he said. “Incidents are frighteningly common.”

The court heard that Truss Worth and Busk provided three people working on the roof with safety harnesses and fall arrest equipment, but it was determined later that some of the equipment failed inspection.

An agreement statement of facts also said Busk didn’t train workers on how to use or maintain the safety harnesses, the crew didn’t install the roof anchors properly, and they weren’t using jacks and planks that were required to do the work.

McInnis’s death isn’t the first time Busk has been implicated in a workplace death in Halifax.

In 2011, he was fined $25,000 and sentenced to 200 hours of community service at Habitat for Humanity after his employee, Craig MacNamara, died when he fell from a roof on Sentry Court in Bedford in 2010. MacNamara had been wearing a safety harness but it wasn’t affixed to a lifeline.

“When he had a second fatality, obviously the first two sentences hadn’t worked,” Keaveny told CBC.

He said the next step under the act for a repeat offender is jail.

“The consequences have to get increased and increased until they work,” Keaveny said. “I think 60 days, for someone who’s never been to jail before, is no laughing matter, it’s a serious sentence but we’ll have to see.”

In his decision, Curran said the 60-day sentence should be “a very significant thing in the life of Mr. Busk.”

“Jails are ugly places,” he said. “Those who are there, especially if they’re unfamiliar with that unfortunate side of life, are almost certain to feel things they have never felt before, quite likely including fear.”

With files from Cassie Willams